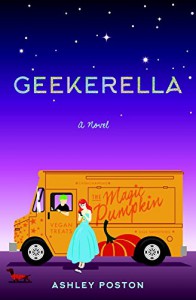 When the typical Cinderella story meets a geeky girl, a comic con and an actor instead of a prince, you get Geekerella. A story unlike any other Cinderella like stories, full with wittiness, geekiness and style.

We have Elle, who is our Cinderella. Her father passed away and left her with her stepmom and her two stepsisters. Elle is also a vivid lover of Starfield, sci-fi series similar to Star Trek and Star Wars. She is also a blogger, where she writes all things Starfield.

On the other side, we have Darien, who is an actor and just got the main character role for the new remake of Starfield. While he deeply loves Starfield, he is not allowed to show those emotions and let everyone knows he is a fan, because it will ruin his reputation. And that is the sole reason why fans don’t like him - he is just another guy that goes for the money and ruins their favourite fan fiction (we have all been there though, haven’t we?).

When fate somehow connects Elle and Darien together, under unknown circumstances they start texting to each other, without revealing who they really are. And that is when everything changes.

A story about love and friendship, but most importantly - a story that teaches you to “Look to the stars. Aim. Ignite.” A story that reminds you to keep believing in who you are and why you are doing what you love. This is an amazing reminder to all of you - to be the people you want to be, because once you are comfortable with who you are and what you love to do - nothing can stop you in being great! And most importantly - HAPPY!

While there were bits and pieces that I could not resist but to cringe on, such as the falling in love through texting, or not being able to say no to your step sisters, or being afraid to tell your fans that you are a fan, while they keep accusing you that you don’t care. (How could this ruin a reputation? It could only make it better)...

While there were things that bothered me, this story was still a great revolution to the Cinderella retelling. No other story has shown a girl to fight for what she loves as strongly as this, without the help of magic or a pumpkin - even though her best friend Sage was really the fairy in this situation.

If you haven’t read it already, please do! It is worth reading it, as it has a powerful message inside of it. I recommend it to all of you out there!

Thank you to NetGalley and Quirk Books, for providing me with an ARC of this book.